On Tuesday, June 22nd 10,000 yogis gathered in Central Park at an event hosted by Flavorpill and JetBlue, creating the world’s largest recorded yoga event. As participants arrived to celebrate the first day of summer and practice with Elena Bower, acclaimed yogi, poet Buddy Wakefield, comedian Reggie Watts, and the music of 13 Hands played in the background.

Generally speaking, fashion and yoga are diametrically opposed; one should not be worried about outer appearance while working on inner change, right? Well kinda, with an expected guest list of fashion industry elite including Veronica Webb, Donna Karan, stylist Lysa Cooper, and Vogue photographer Sandra Hamburg—it was almost impossible not to trend spot before the class began. After all, Central Park is in the heart of Manhattan, the fashion capital of the world. From the unfashionable to the Bohemian chic, light, loose, and free was the common thread amongst participants, most clad in a t-shirt, comfy shorts, and a colorful bandanna. It was surprising to see such a strong reference to the 80s via vintage inspired yoga wear. Some looked as if they had just walked off the set of The Breakfast Club.

Sascha Lewis, co-founder of Flavorpill explains, “Yoga can make the world a better place through its tremendous health benefits and as a conduit for greater awareness. Yoga at The Great Lawn will make those benefits accessible to a much larger community and inspire us all.”

Despite the weatherman's predictions, the spirit of the season was high and a fuzzy wuzzy feeling extended across the Great Lawn. Under simi-cloudy skies and blue mats, the class kicked-off a tranquil start to the summer. 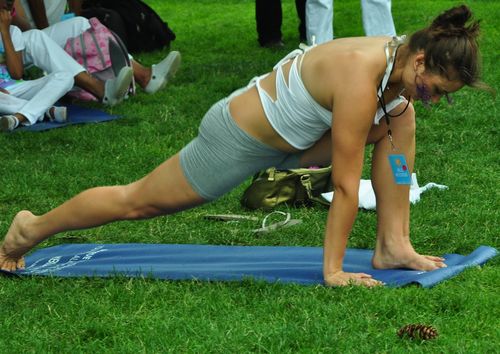 My inspiration to start sewing again: 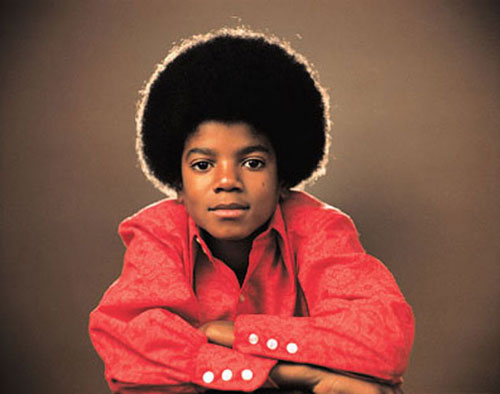 Today marks the one year anniversary of the passing of Michael Jackson and I've decided to repost the entry that I wrote after hearing the news. When you have a moment, put on your favorite MJ track, smile, and  create dangerously my friends. Much ♥!

If the shift from summer to fall puts you in a not so happy place, Mothe’s collection for Fall/Winter 2010 will add a little pep back in your step. Inspired by the work of American painter Georgia O’Keefe, and the vast dry deserts of the New Mexico badlands that influenced her paintings, FIT graduate and Mothe designer, May Kosaka has successfully mimicked the crisp contoured forms which O’Keefe is essentially known for. At the preview, for the fall 2010 collection, bloggers and online trend editors sipped summer cocktails while observing Kosaka’s keen sensibility for creating clothes that incorporate the organic structure of forms that surround us daily.  Sculpted and intentionally slouchy pieces dominated the collection while well-tailored halter-tied dresses and tops perfectly accentuated sternums and scapulas. The collection’s color pallet incorporated rich tones, like clay, mica, sand, and raisin also inspired by O’Keefe’s narrative. One of my favorite pieces was the knit jacket, made of boiled wool, with double lapel and cuffs. I also scampered around the duster pant, with sculpted overlay on the sides, wrapping around to front ankles. Made from mostly wool, with wee bit of lycra the pant is ideal for the shift in seasons; I imagined myself wearing them this fall moving about Manhattan. The cardigan dubed “sanded cardi”, made from lightweight textured wool, with low-slung pockets is another piece that I’d love to own, practical yet punchy enough to shift a simple dress or tank from flat to fab.

Feminine and powerful Mothe’s latest volume is full of substance for women who desire art with their fashion.  In the words of Carrie Bradshaw, “me likey”! 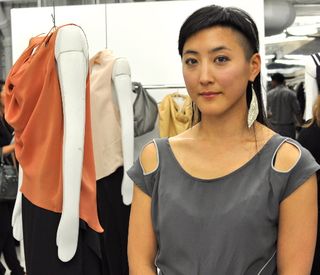 I met Ruth Ansel at a signing for her monograph, Hall of Femmes. If you're not familiar with Ruth's work, she's a superstar art director who has collaborated with notable photographers like Annie Leibovitz and Richard Avedon. When Ruth was 24 years old, she became the co-art director of Harper's Bazaar and the rest is history.  After a long career at Bazaar she moved to The Times, then to Vanity Fair, then to Richard Avedon productions. In 1992 she founded her own design studio, which she currently runs. Ruth's creative direction has resulted in a marvelous career of simple yet spectacular layouts. I'll share more thoughts after studying the lovely pages of Hall of Femmes.

Ruth signing my copy of her book at James Danziger Projects, last Thursday, in Manhattan:) 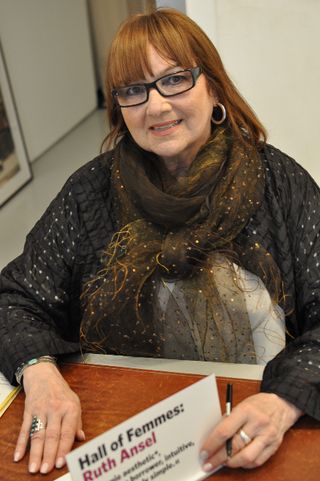 photo : © Lesley Williams, 2010
Ruth was the brains behind the artwork in the NYT Magazine for my favorite boxing match, "Rumble in the Jungle"--Foreman vs. Ali ♥♥ (1974 Zaire) 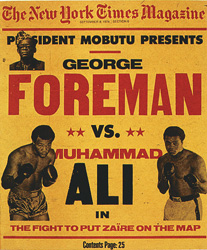 If you'd like to get your hands on a copy of Hall of Femmes, it's available at Dashwood Books.

My dad has taught me many lessons, from fixing a flat tire to doing the laundry to picking out the perfect party dress -- I am blessed to have a wonderful dad. Happy Father's day to all the dads who teach their kids important life lessons and try their best to be amazing. Have a great day, celebrate:)! 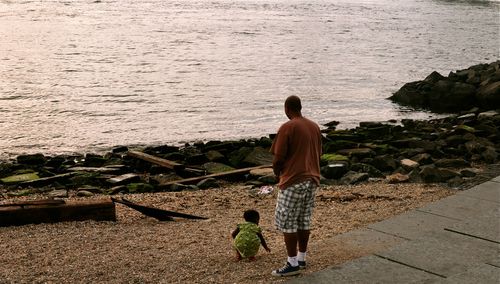