Earlier this month the stylish students at the Marta Valle High School had a chance to strut their stuff on the runway and the red carpet during their Smart & Fabulous Fashion Show. I had the pleasure of working with them and their teachers in the months leading up to the event.

Here's a cool write up about the show in the The Villager! Read more about Marta Valle, in a past post, here. 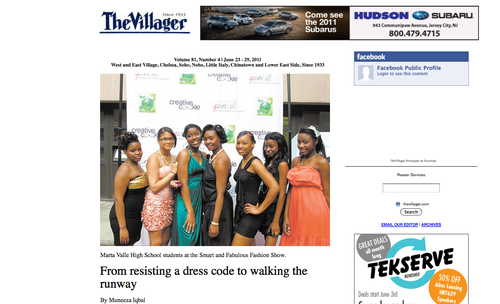 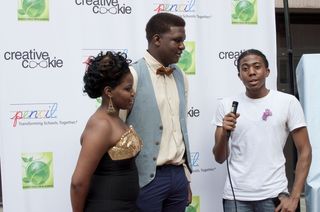 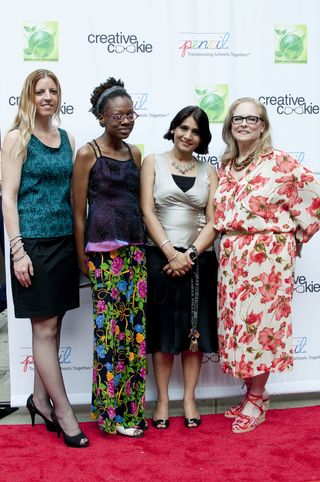 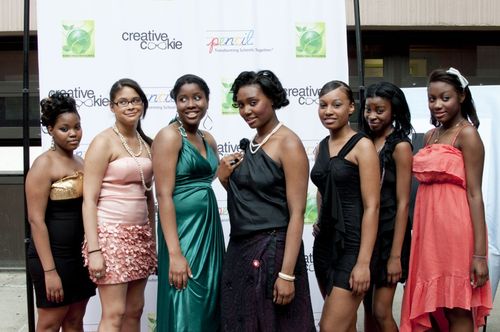 In this interview, writer & actress, Christina Ghubril brings us into her inspiring childhood and the creative process that led her to launch Tea on Tuesdays. Tea on Tuesdays began to steep when Christina started collecting beads at age 6. Her love grew and evolved, as she traveled the world, amassing more materials to make delightful things. On a side note, Christina and I are friends, fellow Pittsburgh transplants to NYC, and former Girl Scout co-workers. Infused with creative ingredients, Christina is indeed a creative cookie collecting treasure along the way.

ME: Do you remember when your interest in beads & jewels begin?

CG: I started making friendship bracelets out of embroidery floss when I was around 4 or 5.  My dad ran a summer camp for teenagers and it was a popular thing they would do while they were hanging out. I was enthralled with the rainbow colors and just really enjoyed having something to make with my hands.  I was often found with in-process bracelets pinned to my jean shorts and my arms and ankles covered in decorations.  Also, my grandfather carries "worry beads" and when I was little, he would dump a pile of old, tangled beads in front of me and I'd play for hours, making him replacements to twirl in his fingers.  He still has some of them hanging on his rearview mirror today! 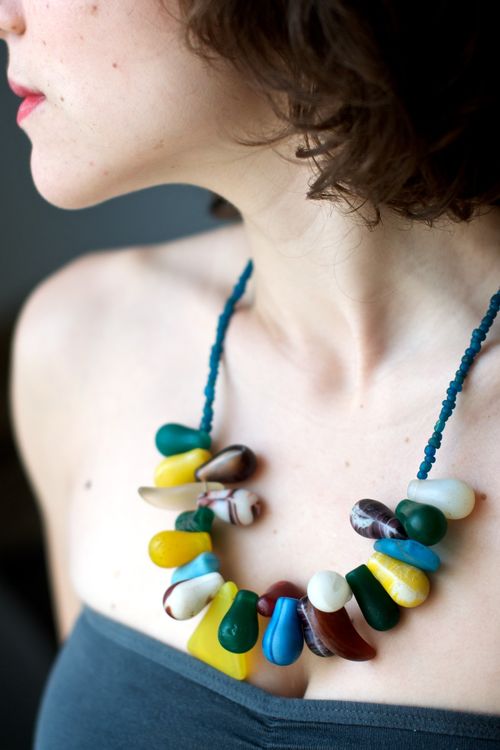 ME: How did you decide on the name of your line, Tea on Tuesdays?

CG: You know, I spent weeks trying to come up with a name and EVERYTHING was already taken!  With the number of blogs, websites, bands, companies all over the world, it became humorous to try and find something original.  After a while, my boyfriend and I would just say random combinations of words, google them and couldn't believe everything already existed.  I wanted something unique yet not too hard to remember.  I used to use my name but since my last name is Arabic, no one could remember it and so it was hard to direct people to my site.  I kind of just tried Tea on Tuesdays on a whim and it (miraculously) wasn't taken.  I thought it was cute and finalized my Etsy site right away!

ME: Where do you look 1st for inspiration?

CG: It's kind of mysterious where inspiration comes from.  I have an ethnically mixed background and have always been interested in other cultures.  I've also been blessed to travel a good bit and love wandering through markets and gathering beads and earrings and all sorts of fun treasures, all of which deeply influence my work.  Sometimes I'll see the color of a shirt on someone next to me on the subway and fall in love and then see that color start to show its face in my work. Sometimes I stumble upon beads I've never seen before and then mess around until I find a cool way to use them.  Usually I just sit down in a heap of materials and get lost for a few hours until I resurface with something structured. 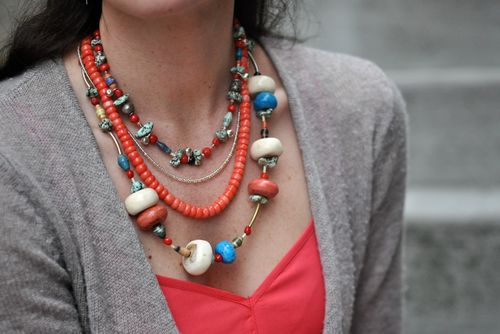 ME: How do you see your line developing in the future? What's next?

CG:  What I'd like to do in the future is structure my shop into different lines.  Since Tea on Tuesdays is still pretty new, I'm working through branding and promotion and trying to figure out the strongest way to highlight the style and to know who to shop it to (If you have any ideas, let me know! ;) ).  I'm also a producer and my partner and I have recently established our production company, Two Kids With a Camera so I am working on shooting a commercial this summer. We're having fun brainstorming something fun and beautiful--and probably a touch over the top.

ME: You are such a well-rounded creative. What other mediums do you work in;)?

CG: Yeah, my background is actually mainly in acting.  I'm also a writer and a producer.  I sing sometimes.  My mom is an artist, my dad plays guitar, I just kind of always had some sort of project or show I was working on growing up.  I wrote and starred in a feature film that is currently in the final stages of post-production called, "Saudade?"and also produce a web show for PBS, The Parent Show, so that all keeps me pretty busy.  I love it.  I feel really blessed to get to do what I love.

ME: Last but not least, what makes you happiest? I sense loads of joy in your work!

CG: I love the creative process.  I love it when I'm by myself and I love it when I'm collaborating.  I love witnessing that everything is constantly living and breathing and growing.  I finished the script for "Saudade?" last summer.  Then it was edited and shaped by the actors and director.  Then shifted in the editing room.  Now is being colored by the music.  I even went in and re-wrote and recorded some of the voice over this morning because it's constantly revealing new parts of itself that need to be fleshed out or shaved off. It's the same with my jewelry.  I have a heap on my work table that is a tangled mess of things I've made over the years that are waiting to be cut up and turned into something new again. I love that. I love that all the elements in my jewelry have some kind of backstory.  I ran into a shop this morning to grab a few pieces I'd had my eye on and the man selling them to me shared that they were from Afghanistan and are over 60 years old. And then I'll combine them with pieces that came from the Czech Republic and were traded in Africa then worn by brides in Mali and somehow ended up in my studio.  It gives me goosebumps, I guess. 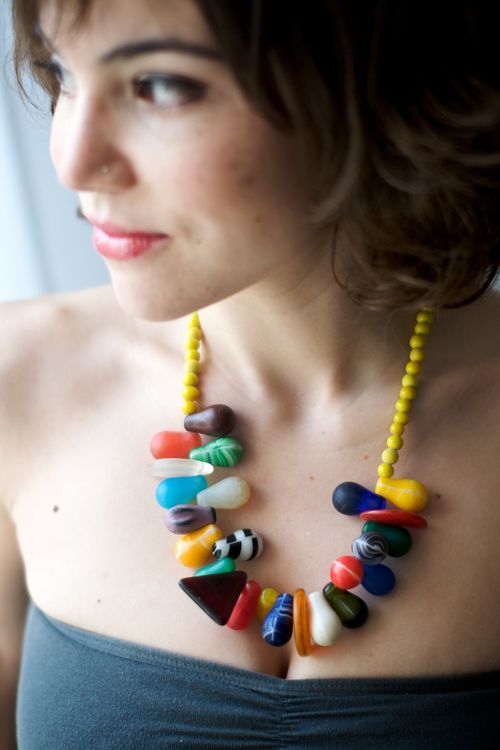 P.S. Use the code CREATIVE COOKIE to get 15% off your Tea on Tuesdays Etsy store purchase (for a limited time)!

This is the end of the wedding chapter and the start of a new chapter as Lesley Ware -- The Creative Cookie. I'm pleased to present the photo album that tells the story of our special Brooklyn DIY wedding! I totally tangled myself in creative projects from making bow ties for the groomsmen to crafting a tent from tulle...I could say more but I'll let the photos speak for me♥♥.

*NOTE: if you are new to issuu there are three ways you can view:
1) click the arrow to the right to view on this site
2) click anywhere on the image above to enlarge
3) go directly to the issuu site click here

Since March, I've been sharing my fashion show production expertise as a volunteer at the Marta Valle High School on the Lower East Side. The students had a strong dislike towards the school uniform policy so the principal, Mimi Fortunato was open to a dress for success dress code, with the purpose of letting the students choose what they felt was  appropriate  school dress. On Friday, June 10th, they'll be presenting over 30 different looks from day to night (school, school dance, college visit, etc.). Please join us for their 1st annual show--details below! 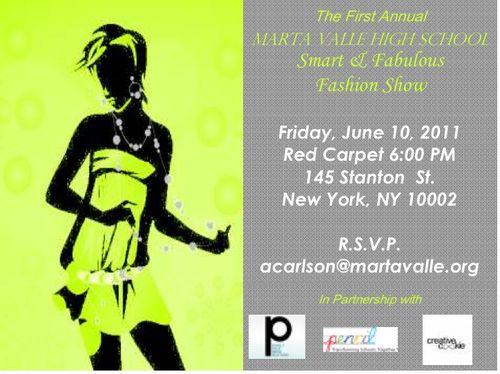 It's official, I've joined the DIYBA team as an official Conference Reporter! This means that I'm happily writing profiles on many of the rad conference attendees. I'll also live blog during the (1st ever) DIYBA Conference (yeah)!

I hope to see you in Dumbo, at the Etsy Labs, on Sunday, June 26th + I'd love to write a profile about YOU;). Be sure to register ASAP for an opportunity to win a $1,000 microgrant from Splashlife.com. 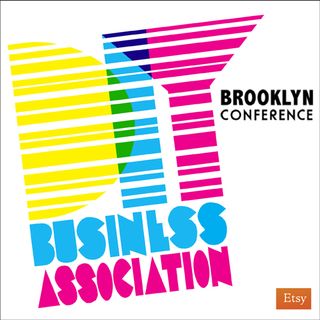 I'm seeking a bright-crafty-fashion loving intern to assist with creative projects this summer. Read the job description here & apply if you have what it takes.

P.S. This is totally the internship that I wish I could have had 3 years ago when I was thinking of starting a blog -- good luck♥♥! 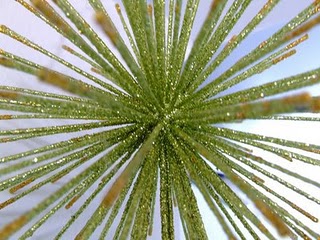