“Be brave enough to be bad at something new.” — Unknown

This is the one thing that I'm actually really good at. My first memory of this was at Muskegon Senior High School when I tried out for the color guard from my sophomore to senior year. Each October I was rejected but I did not give up on that dream until graduation. Twenty plus years later, I still vaguely remember the routine. I danced off beat to On Broadway sung by George Benson, jazz hands, splits, baton and all. This trend continued when I joined the gospel choir, at Western Michigan University, despite not having the best singing voice. I always have to try, even when I don't make the cut.

When I developed the idea of the Creative Cookie, I was in my late 20s and wanted to live a more creative life. I started a blog, not knowing what would happen, but I was open to taking a risk. Fashion blogs were hot, and I had no idea I was creating one until my friend, Jennifer, mentioned it one day and I was like, “oh, yeah, I guess this one of those.”

At the time, I was working as a program manager at the Girl Scout National office (GSUSA), which I thought was my dream job, but it turned out to be not exactly that. It did, however, get me to my dream city — New York! GSUSA was on the edge of the Garment District, and that proximity re-sparked my love of fashion and making things, which started as a young girl. On my lunch hour and after work, I would shop at Mood Fabrics, M&J Trimming and many other fabric retailers in the District.

Memories of sewing with my mom, at home and in church basements, starting at age four, resurfaced, and it was like riding a bike. Before I knew it I had a vintage sewing machine from Craigslist. It cost me $35. Obsessed with making clothes and tiny things, from leftover scraps, in my Brooklyn abode. I left the stress of my day job in the pile of threads collecting at my feet. It was magical to reconnect with a hobby from my youth. The Creative Cookie blog blossomed, opening many doors and becoming a behind-the-scenes glimpse into New York’s booming fashion industry.

The blog never blew up like my counterparts but it was good enough. I remember being invited to New York Fashion Week for the first time in 2010 and being in the room with major bloggers, who are still influential, like Susie Bubble, Bryanboy, Street Peeper and Tavi Gevinson. Oh, and Solange and Kanye West were right there in the room too (and I took photos).

When The Creative Cookie turned two, I threw a huge party and launched a zine called Easily inspired. My then partner said I had to make a choice — “Will it be blogging or your day job? You can’t do both.” So I took the leap, and a few months later I was being myself full time (and working as a sales girl at American Apparel part time). It was uncomfortable at the start (it still is sometimes) but I felt proud knowing that I took a chance on Lesley.

Now I’m back, more than a decade older — 42 to be exact — smarter and living a life that’s 111% creative. If someone would have told me when I began that I would make my own career, start a business that actually makes money, write three books with major publishers, teach at top fashion institutions and museums, have a studio, influence thousands of youth, design a collection, travel internationally for fashion, be a feature in some of my favorite publications and podcasts, you get the picture -- WOW.

I have accomplished so much as a Black woman, who is a first-generation college student from a small town in West Michigan. I have some unique privileges and lots of wins. On the flip side of that, there have been some challenges — always strategizing about how to make more, severe anxiety, fibroids, a divorce, years of therapy and other not so fun stuff. I can say with confidence that the universe wants me to be here. There have been moments where I wanted to fall out in the New York City streets that I love so much and there's that text, email, message in the breeze that says keep going, you've got this.

Now that I have the creative lifestyle on lock, it’s time to become more strategic and prosperous. I want it all — more happiness, to be a mom, deeper relationships with friends and family, unlimited energy to create, inspirational places to dwell/work, fun projects to work on and cookie dough (aka money — I couldn’t resist the cookie pun, LOL). To get there, I realize that I need to heighten my expectations of myself while not being afraid to not be “the best" at everything all over again (for example, I'm sure this post has lots of typos but I'm putting it out there anyways because this is how I write :). I've accomplished so much that I sometime feel afraid to try new things/or be imperfect. I want everything I create to be of a certain standard but now I wonder is that the thing that is holding me back?

I invite you on this random wandering with me — either as a companion or as you move about your own path. As we shelter in place due to the 1st wave of Covid-19 there's nothing to do besides become a better version of you. That does not mean we all have to hustle but just take the time to do some deep internal work and reflecting that will help us to become the kind of person we want to meet, when we can go outside, without wearing a mask again.

Are you down? I hope so. We’re going all the way this time! 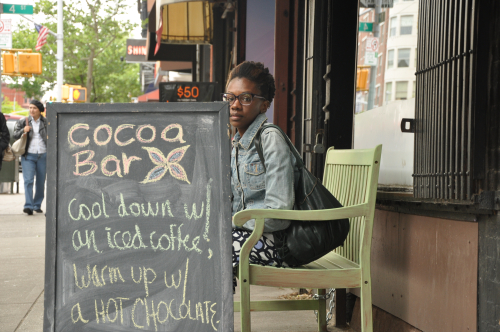 Years ago around the time I started this blog
photo by Kamau Ware, 2009

I'm hosting a series of Make A Mask workshops. The next classes are on Tuesday the 28th at 4p EST (and again on Tuesday, May 5th, at the same time). I will show you how to hand sew your own face mask. Pay what you can. Suitable for adults and children. You don't need amazing sewing skills - just the running stitch or the back stitch (if you're feeling fancy). If you don't have fabric you could use something cotton that you already own. Happy April!
As promised (this is not an April's fool joke). We now have a full schedule of classes covering topics like how to a sew mask, a reusable tote, thread your machine, and more! We will also have a lively chat with a sustainable fashion designer based in Chicago on Friday! It's going to be fun and informative.

In full disclosure, the funds generated from these workshops will keep my tiny team of two working during this pandemic. That said, it is important that everyone who wants to create with us can so please let me know if it is easier to pay what you can for any sessions.

Here's the link to register for these special virtual classes, with me, on Zoom. 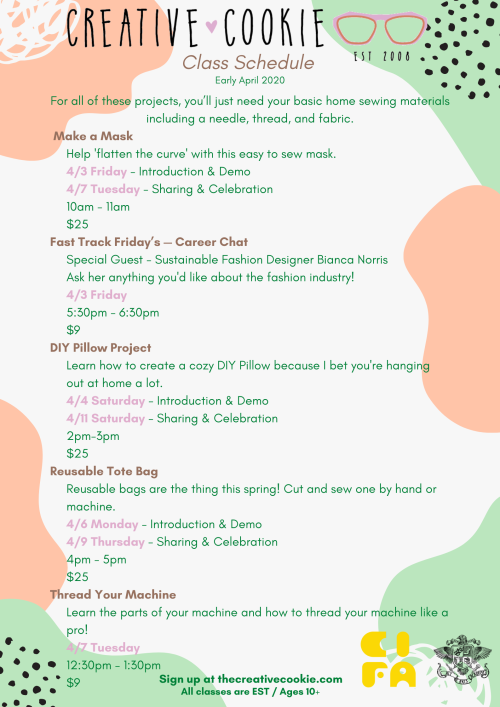